We talk about how community keeps you accountable…

We talk about being surrounded by role models…

And those are all important and true…but now let’s take a look at how communities work.

The best communities in the world get their power from a positive feedback loop powered by one simple idea:

When a community has helped you improve your life, you “pay it forward” by doing something helpful for that community. Specifically, you find some way to help out the most vulnerable people in your community – the people who need it most.

BUT, it doesn’t stop there. In fact, we could argue that this is where the process begins…

Those people you helped out? They become the next ones to pay it forward…and then they inspire the next ones…and so on, creating an amazing cycle.

This cycle allows people like you to hop on at any time and improve their own lives.

So what does this cycle look like out in the real world?

It looks like Cans for Burpees, which is the charity event we mentioned earlier.

Joshua Commons is the owner of If you’re new to the blog, you might not know what a burpee is. Now here’s where the charity comes in…

The King or Queen gets to choose a charity that will receive a special donation from Fit Body Boot Camp Carmel, but not just any donation…

Every July, Fit Body Boot Camp Carmel hosts a Dollars for Pounds Challenge. During the challenge, every pound that someone loses at boot camp will count as one dollar donated to the King or Queen’s charity of choice.

For those of you who are new to Fit Body Boot Camp, you might be thinking that doesn’t add up to much money. You’re thinking that each person in the challenge will only lose about 2 or 3 pounds if they’re lucky, and most won’t lose any at all.

Those numbers in your head come from traditional gym statistics.

Fit Body Boot Camp is not a traditional gym.

In the space of one month, some of our members have lost up to 23 pounds!

At this point you don’t even need to do the math – you know that the Dollars for Pounds challenge will stack up to one HUGE donation for some lucky charity.

Not to mention a lot of people are going to get in the best shape of their lives!

Paying it forward is such a wonderful thing. One could argue it’s the source of all the great things we have in society. A lot of people have worked hard to give us everything we have, so now we work hard to pass something even better to the next generation.

In fact, there’s a specific version of this we see throughout the fitness industry. 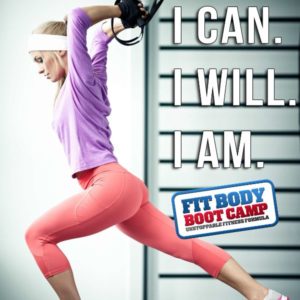 Many of our owners, including our founder Bedros Keuilian, can remember a time in their life when they were out of shape.

Maybe it was back in high school, maybe it was after years at a desk job – whatever the reason, they had a moment when they realized they wanted to change their lives.

And supportive people like Joshua gave them the power to do it.

Now those people are out there helping other people change their lives too!

It just goes to show – paying it forward can make a difference in MANY lives!